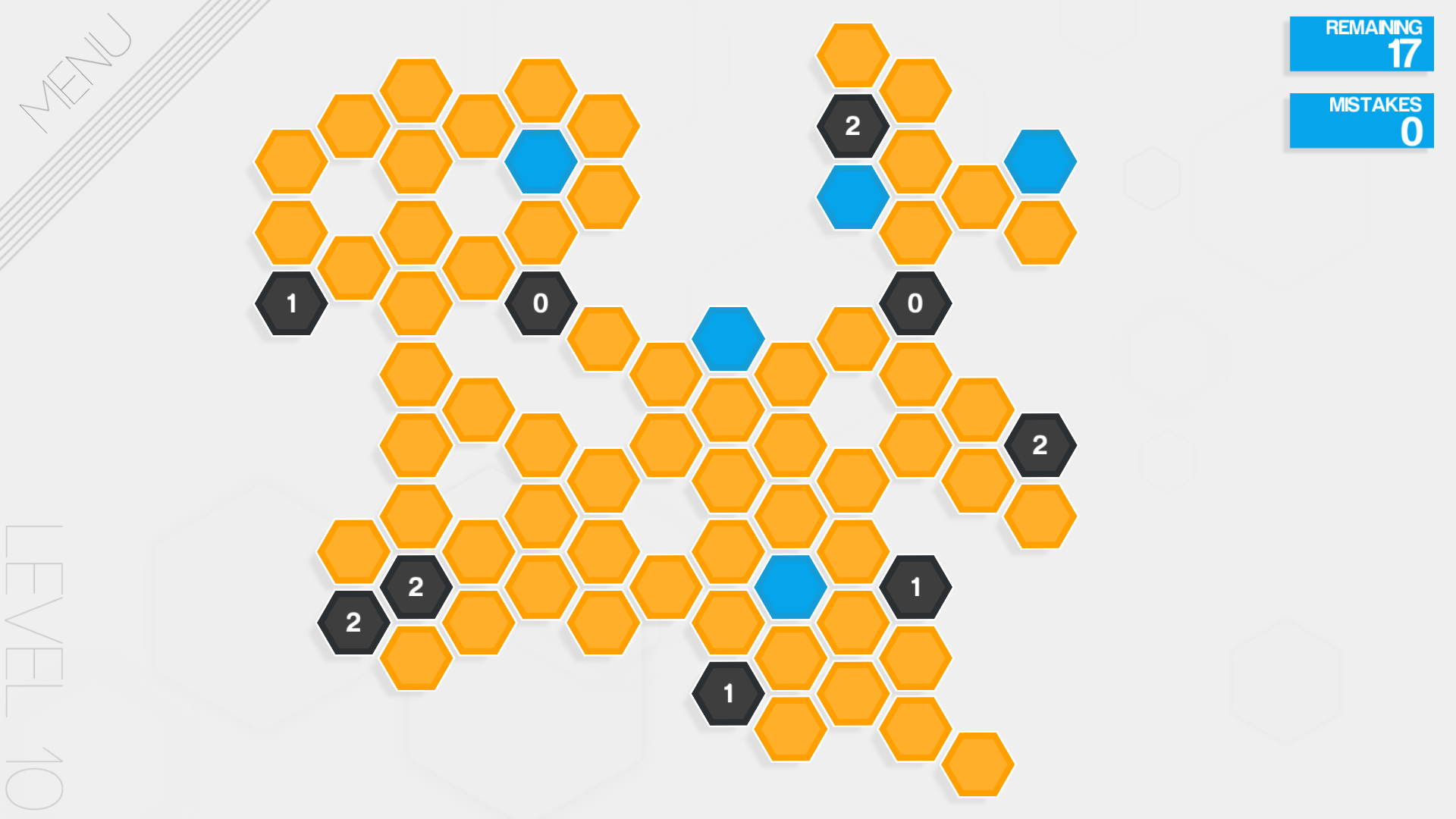 The name “Matthew Brown” probably doesn’t reside in the minds of many, but if you’ve ventured into the puzzle game scene on Steam, you’ve likely encountered at least one of his games. Brown is responsible for the Logic Puzzle Pack , consisting of the Hexcells trilogy and its successors, SquareCells and CrossCells. These games are simple indie puzzle games that follow a common art style and design philosophy, and some of them are downright brilliant.

The first Hexcells was a hit, its mechanics reminiscent of Minesweeper but with far less of an importance placed on guessing. The puzzles start off extremely simply, use the numbers inside the black hexes to tell you the number of adjacent blue hexes. It gradually becomes more complex as the game progresses, introducing columnar and diagonal hex counts as well as some cells where adjacent hexes have to be consecutive or strictly non-consecutive. Hexcells paces these mechanics out perfectly, never leaving the player behind. Hexcells is, at the same time, very punishing to mistakes.

Guessing is never a good option, as you’ll start losing points after only one allowed mistake. Because of this, the puzzles are meant to be solved in a very deliberate way. It starts simply, with only a few black hexes revealed, to minimize the amount of information the player has to process right off the bat. As the player progresses through the puzzle, it expands radially outward, revealing more and more black hexes and more and more areas for the player to keep in mind. Some of the later puzzles can even be downright overwhelming near the end, but the important thing is, again, the pacing.

The other two Hexcells games, Plus and Infinite, aren’t too different from the original, but with some added complexity in the form of new mechanics and technical improvements. Infinite also includes a puzzle generator, allowing you to keep playing after you’ve finished the large offering of hand-crafted puzzles available. This mode isn’t very fun, and I don’t blame it on poor programming. The puzzles in Hexcells are very deliberately crafted to create one or maybe two possible solvable routes, never leaving anything up to supposition. Building an auto-generator for that sort of quality isn’t practical, and would honestly be an incredible feat if it were to be accomplished.

Hexcells also subtly teaches a variety of logical shortcuts to make certain repeated scenarios easier to approach. For example, this set of hexes appears very frequently in Hexcells Plus and Infinite. A -3- black hex is joined to four consecutive orange hexes, with no other blue or orange hexes connected. The dashes next to the three signify that the 3 adjacent blue hexes cannot be all consecutive. At this point, there are two possible outcomes, both involving the two on the far sides. Therefore, the player can deduce that those two hexes *must *be blue in this exact configuration. From then on, any time this same configuration is seen, it translates into a form of mental shorthand that allows it to be quickly filled in. 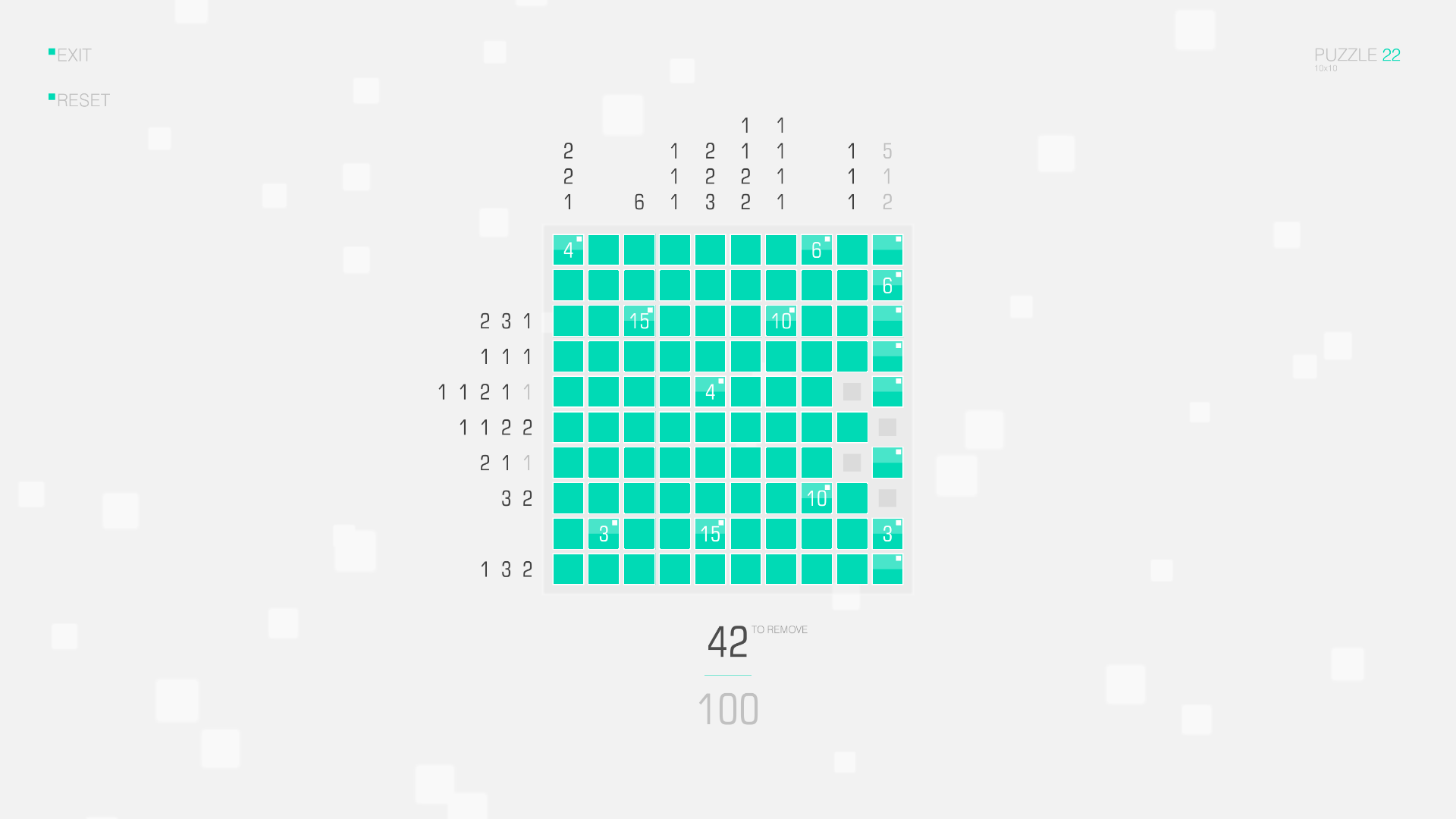 After the successes of the various Hexcells games, SquareCells took the series in a new direction. Its art style is familiar, with clean white backgrounds and echoing sound effects, but with some variations added in color schemes. SquareCells’s puzzles follow a similar ideology to those found in Hexcells, no guessing, but adhere to a completely different set of rules. The board starts out as a grid of squares, all filled in, with some sporting numbers on their faces. These numbers represent the number of total connected (not adjacent) squares that are part of the pattern. The numbers at the top and side enumerate the number and arrangement of squares in that row/column. For example, on row 3 of the picture above, there are three groups of squares, 2 in the first, 3 in the second, and 1 in the third, with all the groups separated by spaces.

SquareCells is actually my favorite of the series, but it has its fair share of problems. Specifically, it abandons one of the things that makes the original Hexcells games as approachable and intuitive as they are: the board starts with all the information that it ends with. Meaning that all of those numbered squares and column headers are presented at the start of the game and stay there until the end. For this reason, SquareCells can often be quite overwhelming, especially with the larger boards near the end of the puzzle track. This issue doesn’t ruin the SquareCells experience, but it’s a symptom of a larger problem plaguing the series as it continues.

One of the biggest improvements found in SquareCells is the ability to essentially make notes in the board without cementing any particular decision. In Hexcells, clicking on a hex to either make it black or blue would cause you to lose points if you were wrong. In SquareCells, only breaking a square (to mark it as not part of the pattern) is a permanent decision. You can add flags to as many squares as you please without losing a point. 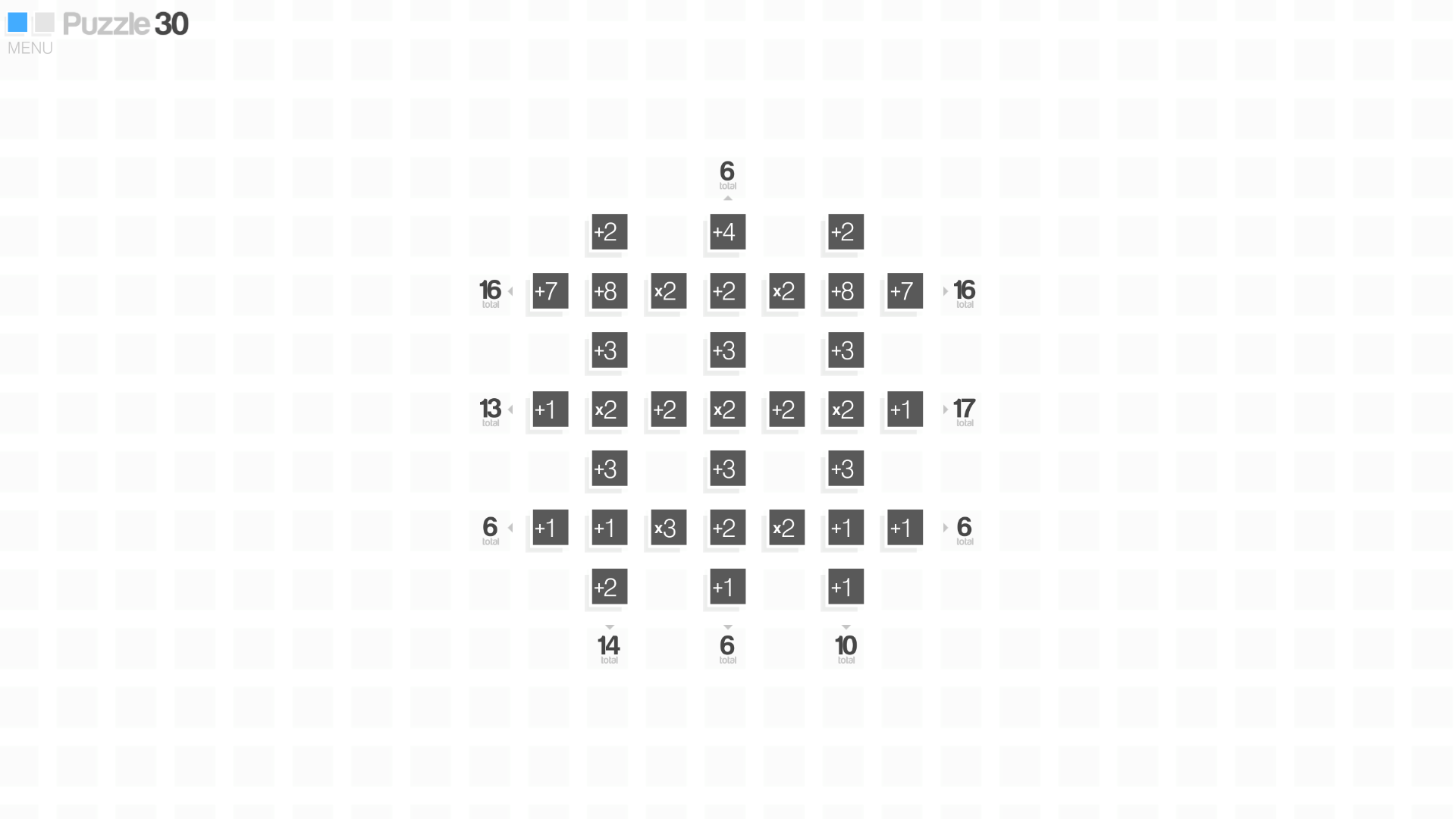 CrossCells is, in many ways, an entirely different animal than its predecessors. On the surface, it looks similar, but it doesn’t feel that way when you play it. In CrossCells, each square is assigned a number, with column and row headings this time sometimes at both ends, rather than just one. The goal is to find a combination of cells that, when added up in every direction, satisfy the requirements of that row or column. For example, in the picture above, the second row numbers must add up to 16 when the calculations are performed in either direction. Sometimes, multiple solutions will be available for a single row or column, but that solution won’t work for an intersecting row or column, so it must be changed.

The main flaw I see in CrossCells that has kept me from finishing it is the same one that first reared its head in SquareCells. It presents the player with too much information right off the bat. The problem is actually exacerbated by CrossCells’s design, with each cell having a number and an arithmetic sign. Additionally, there is no way to confirm that part of a solution is correct, as there are often many different solutions for any particular row or column. You’ll notice in the picture above that there is no score counter, and that’s because any action in CrossCells is reversible. When a row or column condition is satisfied, that condition will be grayed out, but this could occur with several different combinations of cells. Aside from that, the only feedback is the final completion of the puzzle.

Puzzle games are a difficult art to perfect, and they also stretch through a broad spectrum. From games like Portal which contextualize their puzzles in the story, or games like the Talos Principle and Q.U.B.E. , which separate the story somewhat from the puzzles but contextualize the environment, to games like Hexcells which are all about the puzzles. They’re so hard to get right because of how many small mistakes you can make. While I love Hexcells and SquareCells, CrossCells stands out as the weakest link, and a bad omen of things to come in Matthew Brown’s series’s future.