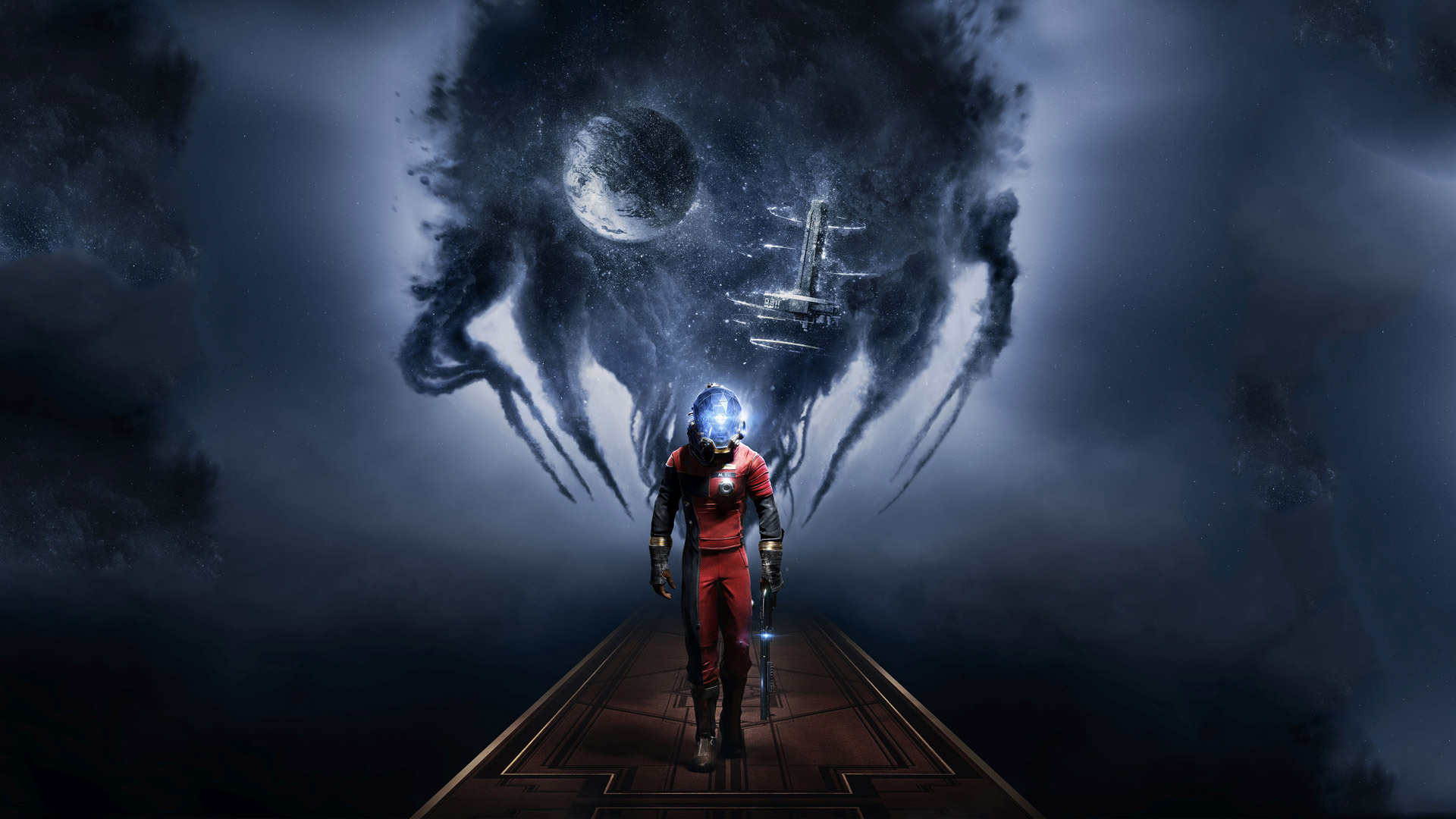 I almost feel guilty not being able to discuss the original Prey (2006), as it’s not even available on Steam anymore. Prey (2017), which will be referred to simply as ‘Prey’, is certainly paying homage to something, but that something is not a linear first-person shooter. Prey is both an “immersive sim” [a name which feels more apt to something like Elite: Dangerous than a game like Prey, Dishonored, or BioShock ] and a game with open-ended and non-linear level design simultaneously. “Open-world” is a polluted tag, but its simplest interpretation of describing a map which can be traveled freely does apply to Prey. The modern “open-world” features, almost endless collectible items and pointless sidequests, are not a part of Prey’s philosophy. Rampant instead throughout Prey’s giant and open space-station, Talos 1, are numerous unscripted puzzles for the player to solve.

Take, for instance, a security booth. The booth has small holes at the bases of its windows (too small for a person), and the glass is reinforced by a force field. The door is locked from the inside, but it can be unlocked with the right key code. The computer touchscreen inside is also capable of unlocking the door, but it’s too far away from the window to reach. The ceiling also has a hatch barricaded shut with an impossibly heavy Reployer. Ultimately, the player decides how to approach this situation. If they’ve invested enough in the hacking skill, they can simply hack the door panel to override the security. If they’ve invested in the Leverage skill, they have enough strength to heave the Reployer out of the way. Should the player have the foam dart-shooting crossbow, they can use it to remotely activate the computer touchscreen and open the door. Alternatively, the player can explore the area to find a sticky note or audio log containing the code for the door. Of course, there’s always the option to turn into a coffee cup and slide under the window slit.

These creative problem-solving situations are not only present when attempting to gain entry to security booths. Almost every situation in the game can be approached from several different ways. This single-handedly carries Prey from being a somewhat-generic sci-fi thriller with shoddy combat to the best application of the immersive-sim design philosophy.

Prey tells the tale of Morgan Yu, one of the chief scientists working aboard a privately-owned space station orbiting the moon. In the year 1958, humanity first encountered the Typhon species via a satellite orbiting the moon. Seventy-seven years and many failures later, the Typhon encountered near Earth have been contained and researched aboard Talos 1. Many technologies, including the Neuromod, a device which allows the duplication and implantation of neural patterns, have been developed as a result of Typhon research. Naturally, the Typhon have broken containment and eliminated most of the crew aboard the station.

While the main, overarching storyline of Prey is lackluster and somewhat generic, there are many other stories to be discovered on Talos 1. Individual crew members are given personalities through their emails, which you can read at their workstations, and their TranScribes, audio logs which can be downloaded from computers or found on bodies. Surviving members of the crew may hold Morgan in disdain for your controversial research and actions, but regardless, they will never be hostile of their own volition. Most of the player’s actions, including rescuing certain crew members, can and do impact the plot, but not in a terribly significant way. 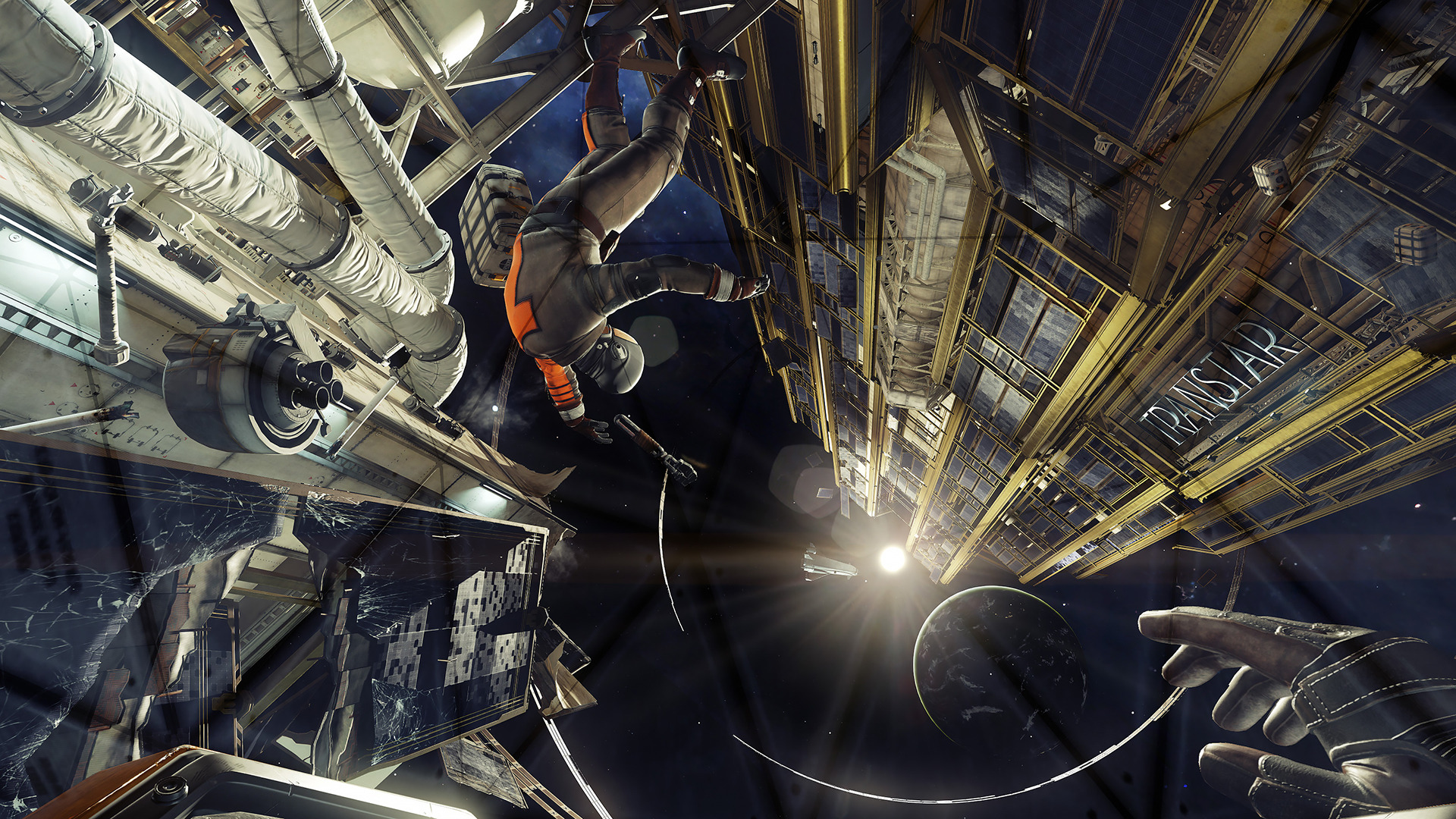 As mentioned previously, Prey is ripe with exploration and unscripted (and scripted) side objectives. Combat is slow and methodical, and charging directly at enemies will most likely result in an early death. Instead, the game rewards creative planning: carrying a turret with you to deal with tough threats, luring Typhon into environmental hazards, and the like. The horror label so frequently assigned to Prey is misplaced. Prey is a ‘thriller’, but not a horror game. Mimics, a form of Typhon that can transform into nearby objects and duplicate them, keep the player on their toes. Almost any object has the potential to be a mimic, especially if it looks out of place. Apart from the usual complement of firearms and other munitions, the player is also equipped with several utilities that don’t deal direct damage to enemies. The GLOO cannon is of particular note, as the freedom this tool allows is quite profound. The GLOO cannon fires sticky projectiles which adhere immediately to almost any non-glass surface (with the exception of itself). GLOO then immediately hardens into a surface which can support the player’s weight (but can also be broken easily with attacks). The use of GLOO allows the player to navigate levels almost without restriction. Don’t want to wait for progression to unlock the stairs? Build a ramp out of GLOO. Need to immobilize an enemy during combat? Use GLOO. Also of note is the aforementioned foam dart crossbow, which can lure enemies with sound and, more importantly, remotely manipulate touchscreens. Almost all computers aboard Talos 1 are touchscreen and can therefore be remotely activated.

Prey’s gameplay is immensely enjoyable, and it truly shines when exploring a new area, which the player is free to do before any of the story quests reach there. However, the gameplay takes a sharp downturn in the last four hours or so. At that point, the now-chaotic Talos 1 is boarded by a TranStar mercenary and a complement of military robots. The dispensers of friendly Operators (small, floating robots) are overridden to produce these new hostile versions. The turn the game takes at this point is for the worse. While the Typhon encouraged the player to think outside the box to defeat them, the Military Operators encourage the exact opposite. They are in no way challenging to defeat; one blast with the stun gun will destroy them or at the very least immobilize them. Worse yet, these enemies are able to fly and attack at long range, so there is little benefit in attacking from a vantage point. After all, the stun gun is out of range at that point. Since these enemies are all the same, the game’s equal rewarding of all play styles comes to a grinding halt here as well. Only two play styles are rewarded at the end of the game: using the stun gun and EMPs, and using the Machine Mind ability, which turns robotic enemies to the player’s side. Thankfully, this phase ends quickly; at the very end of the game, all enemies are removed and many areas of the station are sealed off (the player can load a previous save to go back and explore further). This horrible section of gameplay is comparatively very short to the rest of the 30-some-hour first playthrough I experienced. Despite this, it sours the otherwise satisfying conclusion to the story as it ignores everything that makes the rest of the game great.

Prey is a phenomenal PC game, boasting a plentiful options menu and very stable frame rates, unsurprising due to the game’s use of CryEngine. The frame rate on my PC (i7 4790k / 16 GB RAM / GTX 970) only dipped below 60 looking in one direction in one very demanding area at one point in the game. Apart from that one occurrence, the game was perfectly stable with no crashes or save file corruption. The 20-save limit is somewhat irritating, but Quick saves are automatically deleted and functions are available to manually delete old saves from within the game.

I did, however, experience a few bugs. One side quest fatally bugged and managed to make itself impossible to complete on that playthrough. Operators were a particular problem; they act like Skyrim NPCs with no way to move them out of your way save for robot murder. They also tend to hover in Grav shafts, a form of floorless elevator on Talos 1, and trap the player inside. Apart from the idiotic Operator AI, the other AI in the game is competent at pursuing the player when it needs to.

In terms of Prey’s visual appearance, the design is beautiful. Talos 1 looks and feels like a working environment and not simply a map in a video game, but the graphics tech itself looks as if it was produced in 2013. The clean and attentive design bolsters the otherwise dated visuals to make Talos 1 quite beautiful. The Typhon, on the other hand, have an irritating blur filter applied to them. This causes the Typhon to, at times, look more like homologous black blobs than the terrifying alien species they should be. The blur effect can also be seen on all of the promotional material on Steam .

Both the Typhon and the Humans are well animated (though it can’t be seen very well in the Typhon’s case). Walking animations and weapon animations in particular are very clean and fluid.

Prey should have been new IP, a new name and face for a new game. Talos 1 is both open and full of detail at the same time, all of it available for the player to explore. The game’s nonlinear structure allows this exploratory potential to be realized without replaying the same segments of gameplay over and over, hunting for secrets. The combat is slow, but encourages the player to apply creative solutions to enhance or avoid combat. Even with the sometimes-generic overarching story, Talos 1 bears many rich stories and secrets to be uncovered. The last four-or-so hours are where Prey falls flat on its face, but it’s barely a tarnish on an otherwise unique, thrilling, and deviceful experience.