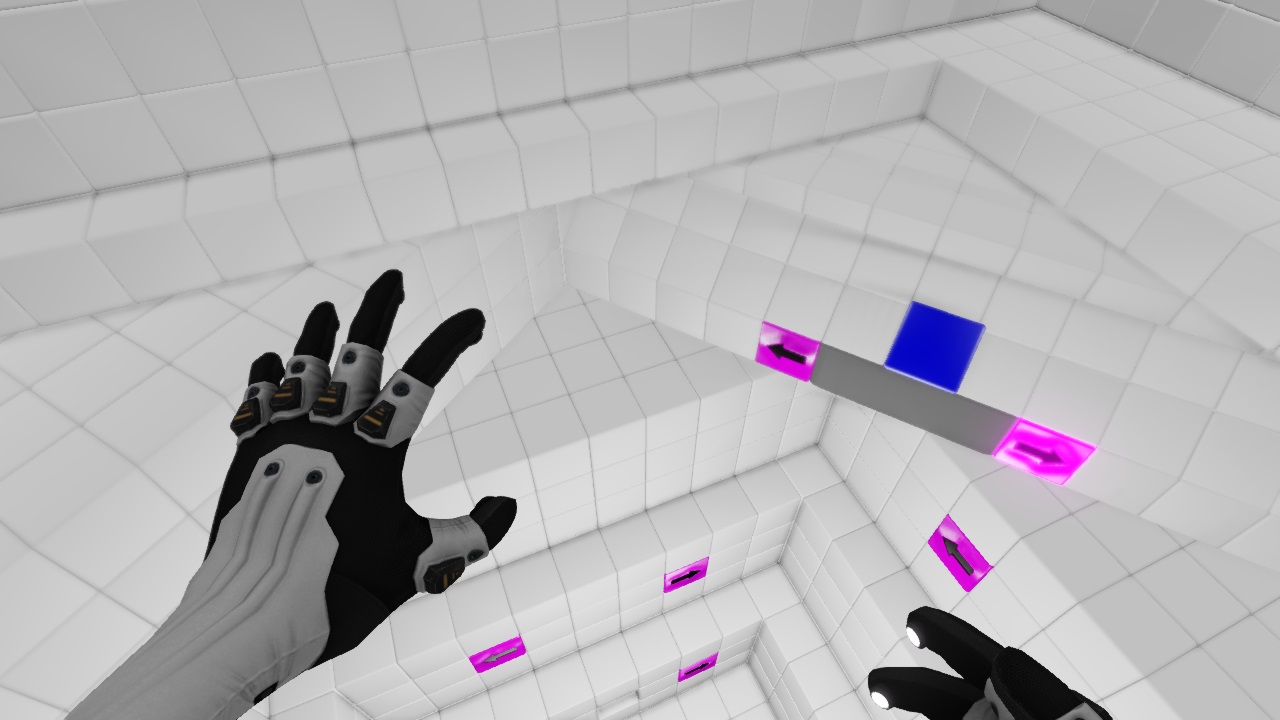 Q.U.B.E. is clearly a game made to follow in the gargantuan footsteps of the mighty Portal, which shook so many small developers and made everyone realize what a puzzle game should look like. It follows a very similar aesthetic trend, with the pristine white-paneled environment gradually giving way to a more industrial and decrepit theme as the structure you’ve been solving puzzles in begins falling to pieces.

You wake up inside the qube with no information on how you got there or what it is. A voice over your radio informs you that you’ve been sent to an alien object hurtling towards Earth in order to find a way to disable it before it reaches Earth. Your character has contracted amnesia as a result of the voyage, and must piece together the truth behind the qube and how you got there from two conflicting sources with whom you have no way to interact. This story, while compelling enough to motivate you through the game, lacks much tie-in to the actual gameplay. This makes sense given that the story was not included in the original release of Q.U.B.E. and was added in later for the Director’s Cut release, which is the one I played.

While Q.U.B.E.’s story is mediocre and uninteractive, this is typical for many puzzle games where more focus is given to said puzzles.

Q.U.B.E.’s puzzles revolve around manipulating colored cubes which all behave differently. The three core cubes are the red, which can be extended and retracted incrementally three times; yellow, which forms a stairstep structure depending on which side is toggled; and blue, which serves as a bounce pad when toggled down and a normal block when toggled up. More advanced cubes and other objects are added later on to increase the complexity of the formula.

Most of the puzzles, especially in the later stages of the game, are physics-based. For instance, you would use the colored cubes to push a ball in the correct direction to fall into a hole. The biggest failing of the physics puzzles-and Q.U.B.E. in general-is that the physics are very inconsistent. Take Portal, for example, where the player’s movement is corrected whenever entering a portal. Simple corrections like that don’t eliminate the need for fast interaction but rather serve to make the solutions more consistent. In Q.U.B.E.’s case, hitting a ball with a rapidly extending yellow staircase may simply cause it to move over an inch or fly across the room. The solution to a certain puzzle may work one time but not the next. Not all of the puzzles suffer from this inconsistency, but many do and it slows down the pace and enjoyment of the game to a grinding halt.

There’s also not much to interact with in the environment save for three small side areas in the whole game. I have high praise for puzzle games like The Witness for making the environment part of the puzzle too. When that’s done, the player must pay close attention to the environment to find hidden puzzles, easter eggs, or bits of story. Not only does this make exploration uninteresting but it adds to the disconnect between narrative and linear gameplay.

Q.U.B.E.’s visuals are a mixed bag. From far away, the mix of colored, interactive objects with the blank white and gray paneling of the walls creates a very pleasing contrast. Close up, however, the quality falls apart. The edges and Ambient Occlusion between objects become blurry, distorted, and just downright ugly. The mouse sensitivity is difficult to fine-tune, which doesn’t have quite the same consequences as it would in a shooter, but it’s still a discomfort. My largest gripe with the PC version is the lack of FOV controls in the options menu. The initial FOV is very restrictive and requires an edit of the configuration files to raise it and constant resets to make it stick. You probably won’t have trouble running Q.U.B.E., but on the technical side it’s still sub-optimal.

Overall, Q.U.B.E. is a fun game. It’s story is decent, but feels disconnected from the gameplay and the environment. The puzzle mechanics seem enticing at first but an inconsistent physics engine ruins a few of the later mechanics. The visual style is solid from a distance, but up close the illusion falls apart. The control the player has over things like FOV and mouse sensitivity is sub-par at best, but can be fixed with some edits to the configuration files. A decently entertaining, but perilously unpolished puzzle game.